We’ve all heard a million times that social media is an excellent way to engage your customers. It’s a new way to have a real conversation and create brand champions. What amazes me is how infrequently this actually happens.

I’ll post complimentary a tweet about a company and I get crickets. It’s an epic fail both a local and a national level. I’m big on including positive reviews of restaurants and events with their Twitter handle. For me it’s about sharing experiences with my online network to spread good ideas. I rarely get responses from companies. I have a fair number of followers, but that shouldn’t matter. I’m engaging in your brand, you need to engage back.

I’m dumbfounded that more companies are not taking advantage of this free and easy marketing tool. All it takes is a quick “Thanks for the tweet!” I’m not expecting a coupon or a free anything, I just want to be acknowledged for saying something nice about you. I want to be recognized for being a free, authentic megaphone for your company, event or organization.

Now for a little back story: My dear friend Meredith is a Dunkin’ Donuts luva. We were traveling in Philadelphia this summer and we had to pose outside of a DD store because she was so excited about the brand and the delicious donuts inside. Since there are no Dunkin’ Donuts in the Denver-metro area, Meredith has to go without. She has to go without the tasty treats until she descends on the mid-west once again. We did partake in some DD goodness when we were at the Philly airport and tweeted about it. Which we got a response to from the @DunkinDonuts team, BTW.

In my cross-country move to Raleigh, NC, I saw many cars proudly wearing the “DD” stickers. I instantly thought of Meredith. She must have one of those stickers.

With her birthday coming up I sent a tweet to @DunkinDonuts asking if I could get a sticker for my friend. I got a speedy response that they did not have any in the office, but to DM them my mailing address and that they would send me one if they found any. Disappointed that I couldn’t fulfill my birthday surprise, and honestly a little skeptical of DMing my address to a corporation, I sent my address without much hope of success.

A few weeks later I got a weird, bumpy package in my mailbox. Dunkin’ Donuts was in the return address. Instantly I hoped there are stickers inside, but I squeezed the package trying to imagine the other contents. 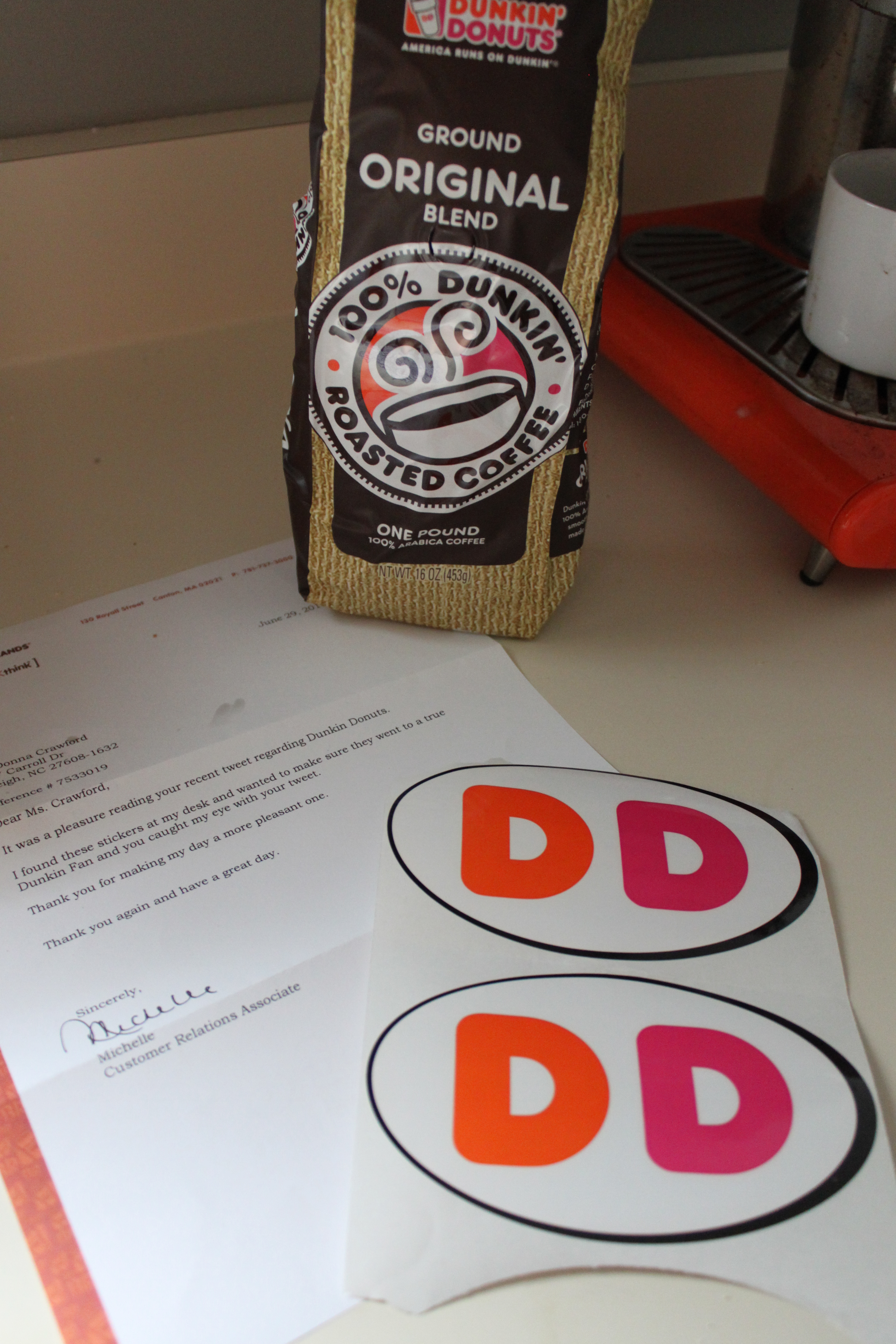 I greedily ripped open the package and out spilled a letter, a pound of Dunkin’ Donuts coffee and TWO Dunkin’ Donuts stickers! The letter thanked me for my engagement on Twitter and said that they wanted to make sure the stickers were going to a “real Dunkin’ Donuts fan.”

The stickers were shipped off to Meredith with belated birthday wish plus a full recap of the amazing social media story. The coffee was brewed and drank (delicious BTW, I totally recommend it!).

What did Dunkin’ Donuts do right here? EVERYTHING! They responded with an honest answer of not being able to fulfill my request, but followed it up with a kernel of hope. They took the online experience offline by connecting me directly with their newest product. They converted one more random Twitter follower into a major brand champion. They even got me to spend the last hour and a half of my free-time writing this post about how awesome they are.

And for what cost? The salary of a team of professional, caring people on the other end of a Twitter handle. That investment is significantly less expensive than an advertising campaign with the reward of much more value.

What is to be learned here?

My stars, companies, you started your Twitter account to take advantage of this new tool, so start using it! Start talking to your flock. They are eager for your engagement. 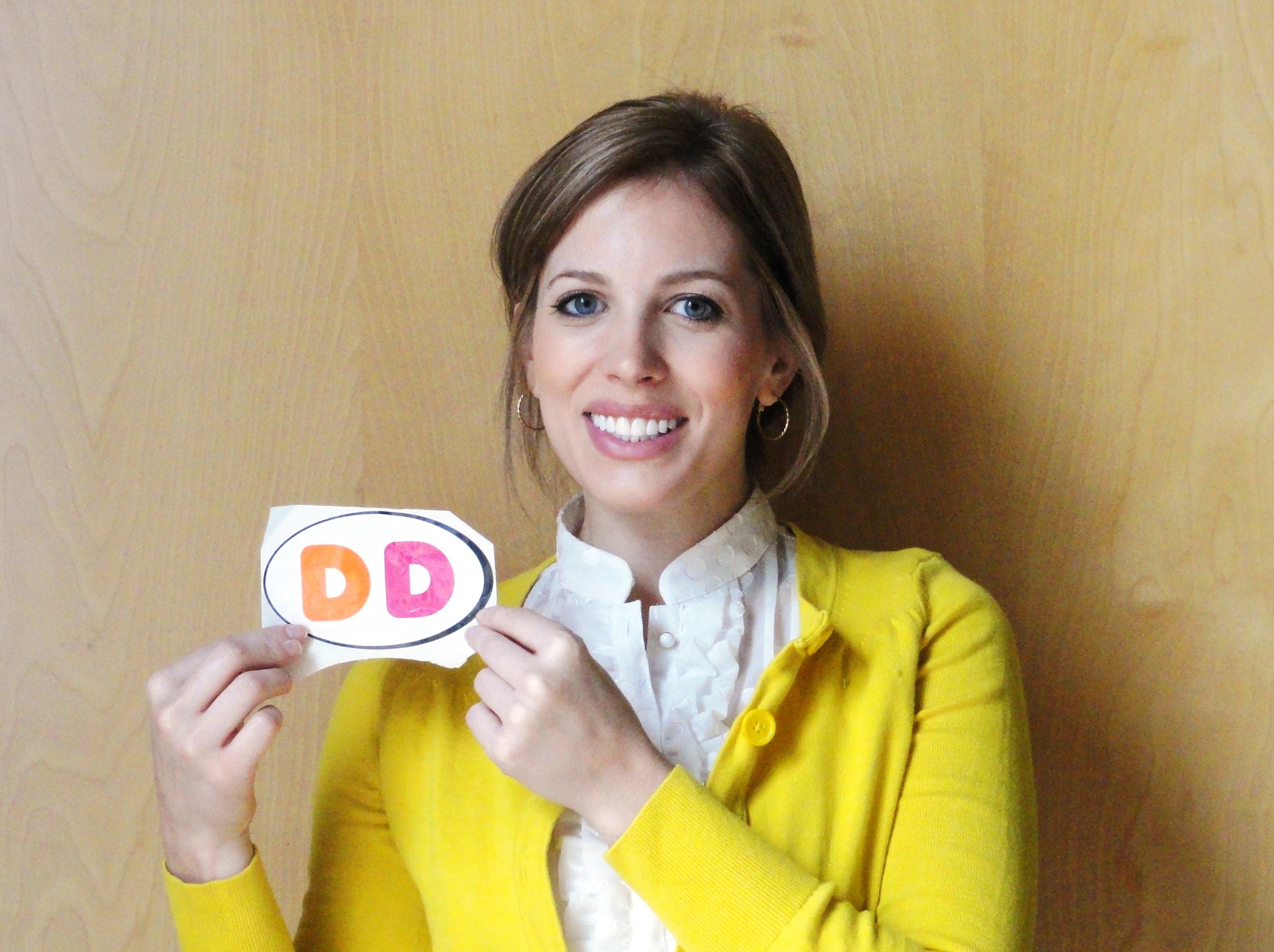 Nice! Well within 8 hours of this post going up I received this response from @DunkinDonuts. Man, you guys are such ROCK STARS!

Dawn has dedicated her career to good. She brings her considerable experience and expertise to helping elevate the nonprofit sector. Before launching BC/DC Ideas in 2010, she earned her chops in 10+ years of communications leadership roles for public health, healthcare and youth-focused nonprofits. Working for nonprofits is Dawn’s dream job, and she loves that her 40+ hours a week make the world a better place.